The book, Chronology of Hinduism~ highlights the rich history of the Hindu religion dating over 10,000 years. For decades, scholars have been telling  the world
that Aryans invaded India and brought ideas and human civilization to the world. While documenting the vast, history of the Hindu religion, this book also examines the Aryan invasion and explains how the Aryan invasion never really took place.
This book is a MUST read for every Hindu and especially for Hindu teenagers and young adults, as they are the ones who is carry the torch and promote Hinduism all over the world!. 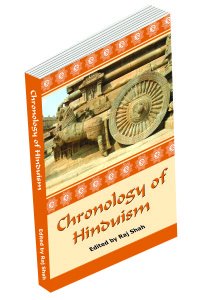 Professor Achar received his early education in India. He earned his MS and PhD degrees from the Pennsylvania State University. His Post-Doctoral work was done at the Argonne National Laboratory. He joined the University of Memphis Physics Department in 1984. He is the recipient of a number of awards. Now he continues as Professor Emeritus. His research interests are primarily in theoretical solid state physics and span nonlinear elastic, dielectric properties of solids, ferro-electricity, electrostriction, superconductivity including High temperature superconductivity. His recent interests are in the application of fractional calculus to Physics. Another area of research is in Archaeo-astronomy, with particular interest in Ancient Indian astronomy, where he has received international recognition.

He has published 110 refereed journal articles, many chapters in monographs and books including submissions to Biography of Astronomers. He has made hundreds of presentations in National and International Conferences. He is a Life Member of the American Physical Society and is a member of several Professional Associations.

Professor Agrawal came to USA in 1975 and has been a faculty member at the Penn State University since 1980. His area of expertise is in the field of materials processing for variety of applications. He has been a pioneer in the field of the application of microwave energy to develop energy efficient processes for variety of materials, including ceramics, composites, and metallic materials. He holds Ph.D. in Solid State Science from Penn State University, M.Tech. from Indian Institute of Technology, Kanpur, India and M.S., Physics from Banaras Hindu University. Dr. Agrawal has been associated with many social, cultural and political organizations. He is a founding member of Overseas Friends of BJP (USA) and was its National President during 1996-2002, and has been associated with RSS, VHP, BST, etc. He has wide interest in Indian culture, philosophy and history.

Dr. Alok Kumar is a professor of physics at the State University of New York at Oswego. He was born and educated in India. Later, he taught at California State University at Long Beach. He has been teaching in the American higher education for over three decades. At Oswego, Kumar has received the Chancellor’s Award for Excellence in Teaching and the President’s Award for Creative and Scholarly Activity and Research. He is the author/coauthor of three books: (1) Science in the Medieval World (1991 and 1996), (2) Sciences of the Ancient Hindus: Unlocking Nature in the Pursuit of Salvation (2014) and (3) A History of Science in World Cultures: Voices of Knowledge (to appear in 2015). He also has about 70 refereed scholarly publications. Kumar is a recipient of the Alexander von Humboldt Foundation, Germany and NOVA/NASA fellowships. About 100 articles are published in the popular media that discuss Kumar’s scholarship. These media outlets include The Washington Post, Family Life, The Scientists, and India Abroad. He is active in the fields of atomic physics, chemical physics, history of science, and science education.

Rajan Narayanan, a yoga teacher and Reiki Master, is also a founder and inspiration behind the Life in Yoga Foundation, a non-profit organization located in the Washington D.C. metro area. He has actively researched many different aspects of yoga and has developed specific new techniques over the years. He has also written a complete translation and commentary on the Yoga Sutras of Patanjali and the Bhagavad Gita. To develop a deeper understanding of the effect on yoga of various religious practices, he has studied all the major religions of the world. Dr. Narayanan’s other interests include marketing consulting and teaching as adjunct faculty in the business school of Georgetown University and other local Universities. He has a Ph.D. in Economics from the University of New York at Stony brook.

A software engineer by profession, Indian culture enthusiast, ardent promoter of Hinduism, and a cancer survivor, Raj Shah is a very positive and forward thinking person. Living in the United States since 1969, he considers the US as his Karmabhoomi,but does not forget his Mathrubhumi India even for a minute. Promoting the rich culture and heritage of India has been his motto ever since he arrived in the US. Keeping those principles in mind he co-founded an organization – the VIP (Volunteers of India’s Progress) Club in Clifton, New Jersey, in 1972. Since then, he has been instrumental in promoting sev12 Chronology of Hinduism eral community organizations. Since retiring from his computer business, Advanced Microcomputer Systems Inc., Raj works full-time as Managing Editor of Desh-Videsh Magazine, which he founded in 1993 with his wife Aruna Shah. Besides serving as a Chairmen of Board of Directors, Hindu University of America, South Florida campus, he is very active in several local and national nonprofit organizations. Raj agrees with an Arnold Palmer Golf Champion when he said, “If the mark of happiness is loving what you do, and doing what you love, then I am the happiest man who ever lived.” Granddad (Dada) of four lovely grandchildren, Raj is a family man and strongly believes in the old Hindu concept of Vasudhaiva Kutumbakam – “The whole world is one family.”

×
The information you enter here will be sent directly to the recipient. It is not stored on this sites database. Read more in our Privacy Policy
SEND